News from the Marvel cinematic universe: Andy Serkis is exactly who everyone thought he was. Namely, Ulysses Klaw. Perhaps the largest surprise from this confirmation is that it was, in fact, meant to be a surprise.

Seriously. Were we not supposed to know this yet?

Andy Serkis’ Klaw will purportedly be a combination of Ulysses Klaw, his father Fritz Klaue, Baron von Strucker, and, somehow, the Howling Commandos.

I’m not sure how that last one fits, but I sure am excited to find out.

If you are new to the Marvel universe, it is time for your crash course in the MCU’s newest confirmed villain: Klaw. 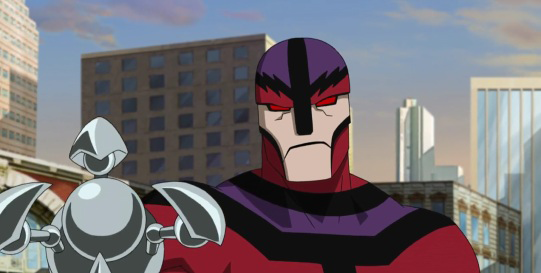 Ulysses Klaw has been in Marvel comics since 1966, when he showed up to fight the Fantastic Four with a vibranium-powered sound transducer for a hand. (It converts sound to solid matter. Go with it.) Klaw’s origin story begins when he:

His powers include strength, durability, sonar senses, and his transducer. Also, Klaw is made out of living sound. Because that’s a thing.

Fun fact: His weakness is vibranium, which causes him to lose mass. Does vibranium sound familiar? It should! It composes Cap’s shield in the MCU.

In his Marvel Comics appearances, Klaw would go on to fight the Avengers, the Fantastic Four, Daredevil and… Well, basically everyone. He would even become the archenemy of the Black Panther.

If we focus on Klaw’s connections to the Avengers and Black Panther, here is the current MCU timeline:

And now that Klaw is confirmed for Age of Ultron, we can assume that he will be facing off against Black Panther not long after that. So while Andy Serkis’ Klaw may not be much of a surprise, I welcome any and all insight into the upcoming Black Panther films.

Crossing my fingers for more news on both fronts.

Bringing out YOUR inner nerd!

Carol Danvers is more than ready for a fight in Captain Marvel #16, the...

Love and Thunder and Batman  It’s been awhile since we’ve gotten...

Wallpaper of the Day – Classic Avengers

We here at Word of the Nerd are proud to continue bringing you the Wallpaper of...

Molly is a 24 year old teacher from the Midwest who currently resides in the West. She likes history, travel, and trying very hard not to set her baked goods on fire. She watches all science fiction religiously and advocates very loudly for good representation in race, gender, and sexuality. She loves antiheroes from the bottom of her blackened little soul.

EMPYRE The return of the Celestial Messiah to the

Check out our review of Thor: Metal Gods Episode 1